One way of getting customers to move to the ERP cloud is Indirect or Digital Access. SAP threatens customers with sky-high licensing fees - unless they migrate to the cloud.

In 2018, SAP made 1.81 billion euros from new contracts in the cloud – 25 percent more than the year prior. The number of cloud subscriptions increased by 30 percent, reaching 10 billion euros.

Admittedly, these figures do seem like a classic success story. However, there are always two sides of the coin: SAP’s cloud growth primarily comes from its acquisitions like SuccessFactors, Ariba, Concur, Fieldglass, and many more.

Let’s humor SAP for a minute and imagine that we agree with it regarding its new licensing model; meaning that we agree that if non-SAP systems access SAP’s digital core, making it a digital access, customers have to pay for the necessary licenses. SAP has been pushing this assumption although it is still disputed in the market (e.g. Voice, a German IT user group, pleaded its case two times to German antitrust authorities).

SAP already told customers in April 2018 how to deal with indirect access, or Digital Access, as it prefers to call it. Because SAP’s first note (2644139) has not been very helpful for both existing and new customers, SAP published two more at the beginning of 2019.

One, 2657803 (Digital Access: central packages), and two, 2669358 (Preparation for Note 2657803). Based on the so-called SAP Passport (technical identifier), it is supposed to be easier now to identify which documents were generated using SAP systems. By implication, this then means that all the others were indirectly generated.

I am just returning from SAMS (Snow Avalanches & Mitigation Strategies) 2019 in Berlin, Germany. During my time at the conference, I got asked many questions about Digital Access. I would like to answer the most important ones now.

SAP tries to measure Digital Access by presuming that everything that was not directly generated in a SAP system must be indirect access. Isn’t it then purposefully ignoring users that do have SAP user access, but are using another system?

While many people think that is the case, it actually isn’t! The licensing change from user to Digital Access also means a fundamental licensing change from named user to digital documents. However, this only really benefits SAP. In reality, the user needs a user license to be able to access transactions in a SAP system (e.g. Professional User). The company then additionally needs licenses for all digital receipts the already licensed user generates.

If an already licensed user accesses SAP systems through technology (third-party systems), then the company does not need another user license; however, it has to pay licenses for all generated documents. This means that SAP is actually charging customers twice!

Unfortunately, this is not possible. In this regard, Digital Access is no different from user or engine licenses. SAP will gladly sell you more, but it won’t take any of them back.

How does SAP handle receipt cancelling? If I cancel receipts, do I still have to pay licenses for them?

Yes, you also have to pay for cancelled receipts. You have to pay while generating the document. (This will certainly become a problem, as there exist customers who regularly deal with mass cancellations as part of their standard processes.)

What happens to platform users, NetWeaver Foundation licenses for third party applications, etc. which were specifically purchased because of indirect access?

SAP platform licenses are unaffected by this change. However, customers can exchange them for digital licenses. NWFTPA licenses are generally unaffected.

So, that’s that. However, customers cannot rest easy yet, as SAP is planning to unveil a third (and maybe last?) version of its licensing model Indirect Access in 2019. This one supposedly is transaction-based and requires licenses for every access triggered externally. Mere data exchange is supposed to not require licenses anymore.

So, SAP seems to be coming around to the idea of again using a transaction-based licensing model. All we can do right now is wait and see.

We Need it Now! Getting SAP Data Out In Real-Time With Log-Based CDC

The Growth Of E-Commerce

Programming: The Battle For Data
Cloud Computing Is No Instant Coffee
Comment 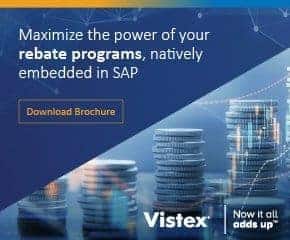 SAP’s Extended Maintenance: What About AnyDB, NetWeaver And SoH?

DSAG Investment Report 2020: A Lot Of Revenue For SAP