The first concepts of artificial intelligence have been around since the 1950s. However, many people still think about AI as something out of a sci-fi novel.

A majority of people even thinks that AI is dangerous and will turn on humans eventually.

This is especially surprising seeing as how much we already depend on one or the other form of artificial intelligence in our daily lives. A simple yet very effective example: Google.

Let’s suppose you’ve never used Google in your entire life. You are still a blank slate; Google’s algorithm knows nothing about you – yet. Then you search for something, and the algorithm comes to life.

It analyzes every choice you make to individualize search results for you, to the point where you will get frustrated if Google cannot correctly guess what you are searching for in the first five search results.

Google is an effective example because of how all-encompassing it is. Everyone knows about Google. Most of its users are aware of how its algorithm works. Many just don’t care about its consequences.

For a population so worried that AI is going to overthrow humanity, we certainly are neglecting algorithms. They are not only useful for websites, but also for more traditional companies for predictions, forecasts, and analytics.

Companies are also realizing the benefits of many other AI-related services, as especially younger customers have more technological expectations. That’s because they grew up with it and are used to the kind of comfort these services bring.

However, many B2B companies are struggling to find the right digitalization strategies. Especially for SAP customers, the successful planning and implementation of new business models is a complex and intense task.

Nevertheless, AI and machine learning in companies are on the rise in every industry – and we have yet to see any algorithm try to overthrow humanity.

AI is taking our jobs

However, when people say AI, they often mean robots; intelligent machines that someday might not need us humans to operate them anymore. And it’s true, automation will make humans obsolete in some cases; manufacturing is the best-known example.

Seeing as how quick AI is advancing right now, some people might be tempted to think that all humans will be put out of work eventually. However, many experts believe that AI is still far from being as multi-faceted as humans – and may never reach this level.

Responsibility for critical decisions lies with humans – and rightly so. AI can help by providing analytics, statistics, reports, predictions, even recommendations. But humans are still the ones deciding in the end.

Digital Manufacturing Is Key To Success 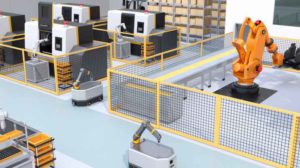 Factories And Warehouses Look To Autonomous Robots To Protect Workers

SAP: Head In The Cloud(s)